TJREVERB will head to ISS on Nov. 21 on SpaceX Flight 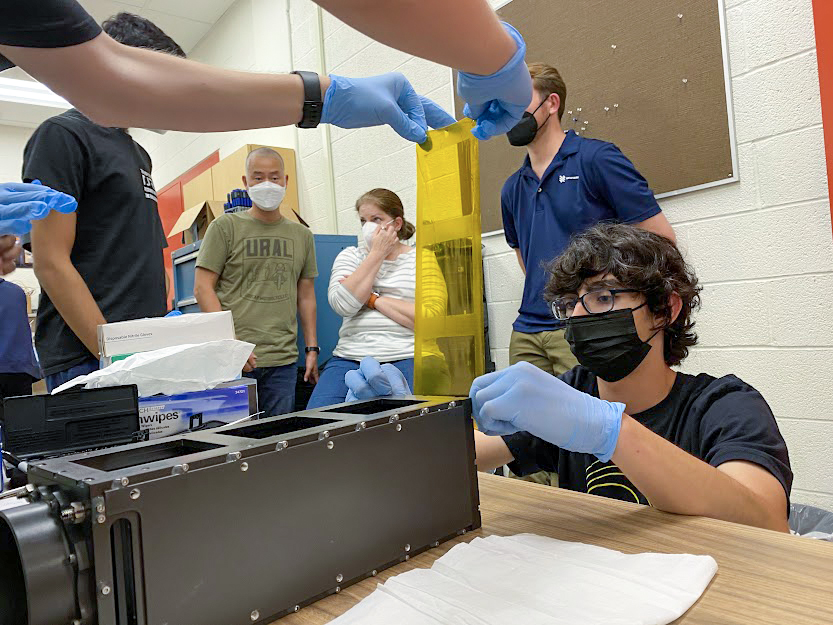 On Tuesday, November 22, at the Kennedy Space Center, Florida, NASA is scheduled to launch the TJ REVERB CubeSat as part of the SpaceX-26 Commercial Resupply Service Mission en route to the International Space Station. The launch is the culmination of seven years of hard work for TJ Space. Led by Robotics lab director Kristen Kucko, many students from Thomas Jefferson High School for Science and Technology have had a hand in this historic launch.

“TJ REVERB is significant because the CubeSat was designed, built, coded and integrated entirely by high school students,” said Kucko. “The students did not use a satellite kit, nor did they have an industry or university partnership to assist them. Building satellites is not an easy task. According to Col. Nick Hague, Astronaut, countries have not been able to build CubeSats. The students in TJ Space should be proud of their accomplishments.”

CubeSats are a small satellite, about the size of a tissue box. The technology was developed by Cal Poly and has become the industry standard. CubeSats allows for more standardized and cheaper deployment of satellites. TJ was the first high school in the world to launch its own CubeSat in 2013, called the TJ3SAT. While TJ3SAT was unable to achieve contact when deployed, it was an engineering feat for a high school.

In the Fall of 2016, a student from TJ decided it was time to build another satellite. This project was more ambitious: They wanted to build a CubeSat with a scientific mission. Their goal was to test if an Iridium radio would work in space. The students won a grant from NASA and were able to begin development of TJREVERB. But as it happens, the students who started TJREVEB graduated and left it for the next class to continue the work.  New students had to relearn the fundamentals of satellite building as well as the specifics of TJREVERB. This was not an easy task. In addition to the normal requirements of school, students had taught themselves CubeSat fundamentals. Quickly the focus of the project went from a science mission to an engineering project. As development of the CubeSat Chassis progressed, the students built a Flat Sat and launched a High-Altitude Balloon testing Iridium’s performance at 20,000ft. Unfortunately, the Flat Sat did not work, and the future of the project appeared to be in doubt going into the spring of 2019.

The program transitioned faculty leadership in May 2019. Kucko started managing the project and became the Principal Investigator. She came to TJ from industry having previously worked at Apple as Technical Specialist. She joined TJ’s faculty as a Design and Tech Teacher during the Fall of 2018, and became the Robotics lab director in the fall of 2019.

One of the key changes Kucko brought to TJ Space was adding outside mentors to assist the students, including Jin Kang of Maru Space Tech, Dan Courain, Justin Annibali of Global Space Exchange and Cain Sauer of Avian. Once the mentors arrived on scene, they guided the students with complex aspects of the CubeSat building, including electronics, programming, and systems integration. 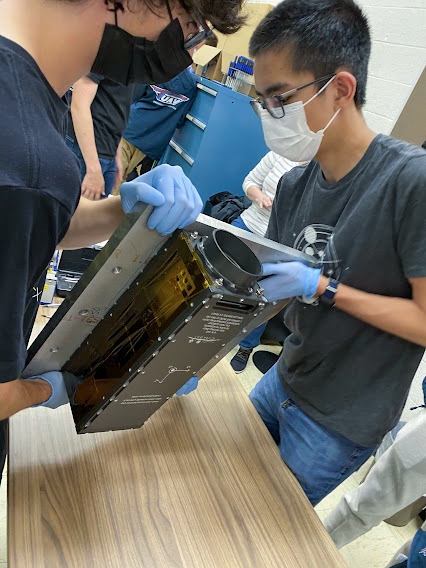 COVID Shuts it Down

Work continued in earnest throughout the 2019-20 school year until COVID ended in-person learning at TJ in March 2020. Since TJ REVERB required so much hands-on work, the project grinded to a halt. In the meantime, almost everyone who had been contributing to the design and development of the CubeSat graduated in either 2020 or 2021.

When in-person school resumed for the 2021-22 school year a new group of students took it upon themselves to finish TJREVERB. The new team reverse engineered the satellite and, in many cases, started fresh. The students spent upwards of 13 hours per week to finish it by the end of 2021-22 school year. The mission shifted from “If Iridium Works” to “If Iridium works under these conditions.”

With hard work and dedication of the team, the students engineered a functioning satellite that accomplished its mission by May 2022. They showcased their work to the Chief of Space Operations, United States Space Force, General John W. “Jay” Raymond (ret.). He was impressed that high school students were able to create a complex system.

Prepping for Launch and Presenting their Research - Summer of 2022

On July 20, 2022, Ms. Kucko and two project leads, Alan Hsu (’23) and Khoi Dinh (’24) traveled to Nanoracks near the Johnson Space Center in Houston to deliver TJ REVERB. Hsu and Dinh integrated the satellite into a Nanoracks Dispenser. The complete and integrated satellite was then shipped to the Kennedy Space Center, Florida to await its launch on SpaceX-26.

In August of 2022, TJ Space traveled to Logan, Utah and presented their paper “Identifying and Overcoming Challenges in High School CubeSat Programs” at the annual Small Satellite Conference. The Small Satellite Conference is the premiere venue for small satellites. It brings both industry experts and universities together to advance small satellites. TJ Space was the only high school team to present their paper and have a booth. The team received an overwhelmingly positive response from conference attendees. Students met and made connections with NASA and government officials, corporate representatives, and universities. When the students were not networking, they attended sessions and learned about commercial space opportunities.

Preparing for Launch and Deployment

Today, TJREVERB is awaiting launch on SpaceX-26: A Falcon-9 rocket with a Dragon Cargo Resupply Capsule. The rocket will deliver TJREVERB along with supplies to the International Space Station (ISS). The launch is scheduled for Tuesday, Nov. 22 no earlier than 3:54 p.m. (exact time is still to be decided) and will be streamed live on the SpaceX YouTube channel. The ship will reach the ISS about 24 hours later. The astronauts aboard the ISS will deploy TJREVERB on Friday, January 2, 2023 (tentatively). TJ Space will begin receiving data from the CubeSat approximately three days later. The plan is to plot and confirm geolocation data as well as observing and documenting how often the satellite can be contacted.

What started as an idea seven years ago will turn into reality over the next few weeks. TJ Space wants to thank everyone for their support, from their mentors, the administration, TJ Partnership Fund, FCPS, their fellow students, and the entire community. They look forward to working on future space-based projects and continuing their exploration of what is possible!